(EGBA) warnings on proposal by the German Bundesrat

(EGBA) warnings on proposal by the German Bundesrat to introduce a 5.3% tax on online poker and slots stakes

The European Gaming and Betting Association (EGBA) has warned that a proposal by the German Bundesrat to introduce a 5.3% tax on online poker and slots stakes would undermine the key objective of the country’s new online gambling regulations to direct online poker and slots customers into a regulated market and would be in breach of EU state aid rules.

The effect of the tax measure would be twofold. Firstly, it would impinge upon the competitiveness of the licensed and regulated online poker and slots offer and lead to 49% of German players preferring to use unregulated websites, according to a new player survey published by Goldmedia. Players outside of the regulated market would be deprived of the protection of German consumer laws, rendering the proposed tax incompatible with the key objective of the country’s new online gambling regulation due to enter into force on 1 July 2021.

Secondly, the proposed tax measure is punitive and would, in Bavaria for example, result in online poker and slots being taxed at rates 4-5 times higher than their retail equivalent land-based casinos and 15 times higher than slots in land-based amusement arcades. This would provide a substantial and unfair tax advantage to Germany’s land-based operators over their online counterparts. The EGBA believes that this would constitute an illegal state aid under EU law. According to Goldmedia, the substantial tax advantage for land-based operators would be as high as €290 million each year in the state of Bavaria alone.

In light of these concerns, the EGBA urges members of the German parliament to reconsider the proposed tax measure when it is debated in the Bundestag in the coming weeks. Alternative tax rates, more closely aligned to those imposed by other EU member states, would ensure that the overwhelming majority of German players use licensed websites and benefit from the protection of German consumer laws, in line with the key objective of the country’s new online gambling regulation. 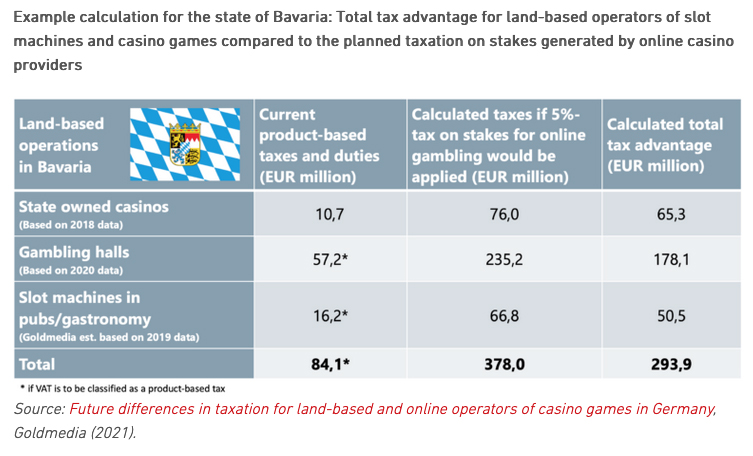 EGBA has already shared its concerns about the proposed tax measure with the European Commission. Should the tax measure be adopted as proposed, EGBA will consider all options, including filing a formal state aid complaint with the European Commission. The European Commission has previously determined that differentiated tax treatment between online and land-based casinos qualifies as a state aid under EU law. In that Danish case, the Commission concluded that a lower tax rate for online casino was justified by the overall consumer protection objectives of creating a regulated and safe online environment, in view of the inevitable competition with the unregulated online market.

In Germany, the Bundesrat actually proposes the opposite: a much higher tax rate on online poker and slots compared to the land-based alternative, without any obvious consumer protection or other valid justification under EU state aid law.